I had a conversation a while back with someone from Chicago about the Chicago “industrial” music scene, and he asked me “What bands are even in Minneapolis right now?”. I didn’t have a good answer for him at the time, not because we are lacking in great music, but because a lot of the currently active bands have a mostly local focus.

Long time City Pages Gimme Noise blogger Andrea Swensson has departed the paper for The Current and in her farewell post this week, she articulated what’s been in the back of my mind for a while:

Just last month, during a taping of The Local Show with my new employer, 89.3 the Current, host Dave Campbell asked his guests if we thought we were living through another golden age of Minnesota music. Without pause, Chris Riemenschneider from the Star Tribune, Ross Raihalafrom the Pioneer Press, and myself—all longtime documentarians of the local scene—nodded our heads and answered in a unanimous “yes.”

There is some phenomenal music being created in our back yard, and it’s not just one or two genres that are thriving right now. We are very lucky. From hip hop to rock to metal to the various electronic genres, there is an abundance of tremendously talented artists and bands in the Twin Cities. But let’s focus on the darker, synth based and electronic bands.

The abundance of great local shows this past week is a perfect illustration of what’s happening on the synthy/darker side of local music right now.

There were three shows on Friday night that I had on my calendar. Three! While it’s unfortunate that I had to choose one show, it says a lot about the depth of talent in the Twin Cities. 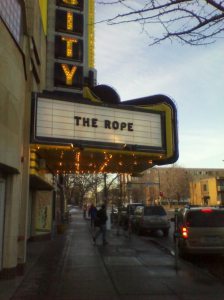 I’ll start from the top with The Rope. Most of The Rope’s shows have featured extremely diverse bills at a wide variety of venues and this is reflected in their following. The band made their debut at The Varsity Theater this past Thursday night and the crowd was filled with people of all ages and from all walks of life – everyone from the leather and combat boot clad to university students to music geeks of all assortments.

Whether they realize it or not, The Rope are on the cusp of doing something big for Minneapolis music, in particular because of their willingness to join forces with bands very different from themselves musically, including electropunks Thought Thieves and The Night. More on the electropunks later.

END_OF_DOCUMENT_TOKEN_TO_BE_REPLACED

Things have been a little quiet on the site since Freezepop was in town, so we’re well overdue for an update. The Kilted Farmer team has been taking a well deserved break after putting on 8 shows through the first half of the year. There’s still great live music to be seen and heard while we’re on a break. Below are a few upcoming shows that have caught my attention.

And also don’t forget to support the venues and club nights that support great dark music! Here are a few to keep you busy: