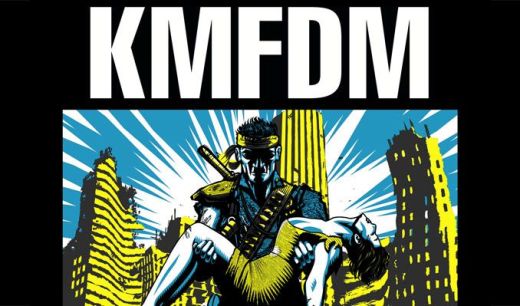 Spawned in Paris, France on February 29, 1984, Kein Mehrheit Für Die Mitleid (which loosely translates into “no pity for the majority”) was initially an industrial-audio concept accompanying art-installations by Erste Hilfe, a group of painters and sculptors, enfant terrible of the mid-80’s German underground art-scene.

In the following years, KMFDM began to pioneer the crossover between techno/dance and heavy metal with their signature sound. Relocating to Chicago in 1990, KMFDM was the pride of Wax Trax Records during the label’s peak.

Under the leadership of German-born music founder Sascha K. a/k/a Käpt’n K, the only permanent member throughout the band’s history, KMFDM is still going strong after almost three decades of conceptual continuity, regularly recording and releasing albums and frequently touring the world over.

Despite the fact that KMFDM consumed the majority of his time and efforts over the years, Käpt’n K still got involved in several side-projects (MDFMK, Excessive Force, Schwein, KGC, OK•ZTEIN•OK) and made a name for himself as a music producer as well as a remixer (Metallica, White Zombie, Front 242 and many more).

Between 1990 and 2007, KMFDM’s headquarters shifted between Chicago, New York and Seattle, since 2008 KMFDM operates out of Hamburg, Germany, again.

To quote themselves, “The future belongs to those of us still willing to get our hands dirty”. Living by their D.I.Y. philosophy, KMFDM not only started their own music-publishing entity KMFDM Ent. US (BMI) but was also one of the first bands to ever launch an online merchandise-store, (KMFDM Store) and finally consequently, their own record label, (KMFDM Records).

Though once feared dead after the release of the album ADIOS in 1999, KMFDM re-emerged quickly, harder, faster, and better than ever. After the permanent departure of most of the former collaborators due to internal strife and irreconcilable differences it was time for tabula rasa, a clearing of the deck.

New York native Lucia Cifarelli, previously the singer of the band Drill, made her first appearance in the KMFDM-camp during the project MDFMK, later she joined the re-formed KMFDM as front-woman and female lead-singer.

As a powerful vocalist and expressionistic songwriter she has redefined KMFDM, as female vocals are no longer relegated to the background. The Metropolis Records debut ATTAK , recorded in 2001, showed that this newly reinvigorated KMFDM could not be stopped.

Since 2002 the lineup has been rounded out with the impressive talents of Andy Selway (the YoYo’s, Pig, Schwein, The Dwarves, Spittin’ Cobras) on drums and guitarists Jules Hodgson (Lodestar, Pig, Schwein, Spittin’ Cobras) & Steve White (Pig, 16 Volt, Deathbed Repentance). What these boys, lovingly known as “the pigs”, brought to the table was made unmistakably clear on the new line-up’s first album WWIII, a brutal thrashing and a sound that once again re-defined KMFDM for years to come.

By 2004, celebrating its 20th year, KMFDM was producing new material and touring at a frenetic pace. Europe, Russia, Canada US & Australia were visited. 2005 saw the release of the album Hau Ruck, again bolstered by a massive amount of live-performances all across the globe. A companion remix EP entitled Ruck Zuck followed in 2006 and to go with them, the Hau Ruck Zuck USSA Tour. 2007 brought Tohuvabohu, featuring a grand mixture of the band’s many styles. In 2008 the band, meanwhile relocated to Hamburg, released its first full-blown remix album ever, Brimborium.

Celebrating their 24th Anniversary on February 29th 2008, KMFDM announced KMFDM 24/7, a series of twenty-four seven inch vinyl singles featuring tracks from the band’s original 12″ singles and classic album cuts. KMFDM Records released the singles on the first of every month in the order they were originally released for 24 months culminating on Feb 01, 2010 with the brand new exclusive single Day Of Light. Each of the 24 singles was available in a Limited Edition First and Only Pressing of 250 copies, remastered specifically for vinyl and featuring the original classic KMFDM artwork, most by famed KMFDM cohort Brute!.

KMFDM remain a musical entity to be reckoned with. Through relentless musical exploration and reinvention they have continued to top themselves. 2009’s album, Blitz, was no exception. KMFDM also released – SKOLD vs. KMFDM, a 22 track album by Tim Skold and Sascha Konietzko. The juggernauts of the alt-underground came together again to tear it apart. SKOLD vs. KMFDM was available exclusively through the KMFDM Store in fan-friendly CD, audiophile Vinyl and high quality MP3 formats.

After an extensive 25th anniversary world tour, the band brought in 2010 with a bang, releasing Krieg, 12 tracks of new, diverse and exciting remixes of tracks from Blitz reworked by top names across the musical spectrum. Then the Für Die Mehrheit Tour played festivals and headlining shows in Europe over the summer, hitting ten countries along the way, as well as releasing the Limited Edition Godlike 2010 CD, a special celebration of the 20th Anniversary of their classic song “Godlike”, available exclusively on KMFDM Records through the KMFDM Store. Godlike 2010 compliments the release of two collections of KMFDM’s best-known tracks – Würst, a “würst of” collection, along with a Limited Edition Double Disc version titled Greatest Shit.

To kick off 2011, KMFDM released their first new single and video in 9 years, Krank in March with great chart success in the US and Germany. This was followed by their new album, WTF?! And again, relentless touring in both the US and Europe.

In addition to their new material KMFDM have re-released their entire back catalog from the band’s WaxTrax! Records era as well as Extra, a three-volume set of double-disc collections of tracks not included on the ten KMFDM Classic albums. It features remastered tracks from the band’s 12″ singles and CD singles, all of which had been out of print for many years.

As can plainly be seen, the self-proclaimed fathers of industrial-rock show no signs of stopping. February 26, 2013 sees the release of the brand-spanking new album KUNST and a 22-date tour of the US commences on March 8. Throughout the remainder of this year, the band will be touring extensively, kicking it off in April with several dates in Europe and the UK.

CHANT is the tribal-infused apocalyptic drum project of Bradley Bills from Austin, Texas, who has spent the last 8 years solidifying its mark in the Industrial Rock world with a constant tour schedule supporting Lords of Acid, Angelspit, My Life With the Thrill Kill Kult and most recently opening for both of KMFDM’s US tours in 2013.

Since inception, Bradley has worked with members of The Butthole Surfers, Skrew, Pigface, and The Razorblade Dolls to record and co-produce CHANT’s two independently released albums: That Which Divides (2007) and Strong Words For Strong People (2010), squeezing in time to contribute drumming duties for Pigface, Evil Mothers, and Jurgen Engler (Die Krupps).

Having released a 3 Track ‘Free to Fans’ EP: “Universal” in late 2013 – CHANT is preparing a new onslaught of apocalyptic shows in Europe supporting Die Krupps on their 2014 “The Machinists of Joy Tour” with Bradley manning the drums for Die Krupps themselves!

INERTIA was formed in 1992 by Reza Udhin.

After an extensive period with other industrial acts, Reza decided to concentrate on a solo project which brought together elements of Industrial and Techno to form something quite different to anything in the scene at that time, following several name changes, Inertia was born.

INERTIA were immediately signed to Germany’s Celtic Circle Productions within a few weeks of forming, and released their debut MCD INFILTRATOR, in June 1995. This CD was a re-recording of the band’s first demo tape.

INFILTRATOR was an immediate success, achieving excellent reviews across Europe, UK and USA. The CD was played at several clubs where it became an instant club hit.

INERTIA marked their first European live performance in September 1995, when they played Celtic Circle’s NIGHT OF DARKNESS festival at the Kulturfabrik in Krefeld, Germany. The audience were amazed by the sheer power, aggression and energy of INERTIA’s live performance, that INERTIA returned again to play Europe in December 1995, playing to audiences in Switzerland, Germany and Belgium, achieving great success and attracting a huge following.

They returned in April 1996, to play at the Wave Gotik Treffen festival in Leipzig, Germany, which again proved to be positive.

INERTIA returned to the studio in February 1996 to start work on the long awaited new releases. The result, PROGRAMMED TO RESPOND CD album and MIND-ENERGY MCD. These recordings were done in Germany and a variety of studios in London, including Raymond “Pig” Watts’ studio Ranch Apocalypse.

MIND-ENERGY was released in December 1996 and PTR released in February 1997. These CD’s achieved a high amount of success in Europe and USA. So much that INERTIA did a mini US tour in January 1997, and then returned to the States to do a full-blown US tour in May 1997, together with the German band DAS ICH. This tour was overwhelmingly successful and created a huge audience for INERTIA in the USA.

A UK tour was completed in September 1998, a Fall 1999 Scandinavian tour was impressively successful which saw the band play to audiences in Sweden, Norway and Denmark and an ecstatic audience reaction was received when the band returned to Leipzig, Germany for the Wave Gotik Treffen 1999.

A brand new album, NEGATIVE PRIME, was released in May 1999 on NIGHTBREED RECORDINGS, which pushed the sound of INERTIA to further heights. 1999 also saw the band complete a UK tour with the US band SPAHN RANCH.

A remix CD “Positive Angel” was released on Inertia’s own label CRYONICA MUSIC. And Inertia’s 2nd USA Tour took place in Summer 2000, which saw Inertia headline their own tour.

The band then returned to the USA again in 2001, and took Sweden’s Project-X with them as support for a mega 7 week tour!!!!

November 2001, the new single “No Defect” was released, becoming an instant club hit, and getting to number 6 in the Dutch Alternative charts.

In December 2001, Alexys B, was voted sexiest female of the year in the UK’s most popular alternative magazine, Meltdown.

April 2002, the new 18 track album “Advanced Revelation” was released, and has since brought great praise from DJ’s and magazines around the world. Andrew Trail, joins the band on Keyboards.

In Summer 2003, Inertia go back to tour the East Coast of the USA for 4 weeks with New York band Terrorfakt, as support.

May 2004, a new album is released “Black Ice Impact”, followed by a West Coast USA Tour with UK band Swarf as support.

December 2005, Inertia release the double CD “Best of” CD “Decade of Machines 1994-2004” . The DCD is released in Europe by Cryonica Music and in the USA by Cleopatra Records. Reza officially joins legendary Industrial Rock band, Killing Joke, as the Keyboard player.

March 2010 Inertia release a new album entirely of covers! The band put their own twist on classics by T-Rex, The Beatles, Depeche Mode, Elvis Presley, Sparks to name but a few. Andrew Trail and Bob Malkowski leave Inertia to be replaced by Kneill Brown (ex Killing Joke, Killer B Movie) on Guitars and Andrew Lowlife (Swarf) on Synths and embark on a series of concerts with the new powerful line up.

September 2010, Inertia release a new single “Repeat & Follow”, then in November 2010 release a new album “Deworlded”, which spark rave reviews from around the World. The band toured throughout 2011, hitting the UK, USA and Europe.

2012 is Inertia’s 20th year anniversary! Inertia have just signed a new record deal with Metropolis Records in the USA for the release of the new album “Universal Blood”.

“Inertia are the best and most aggressive band in London” .. Gary Numan