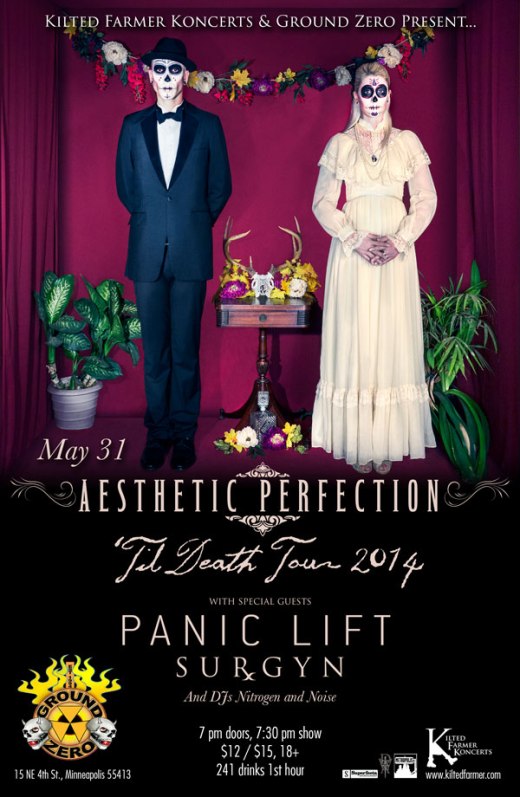 Aesthetic Perfection’s Daniel Graves is not one to allow himself, or his music, to stagnate. On the new album, ‘Til Death, we find an artist who, despite an overwhelming outcry for a return an earlier sound, refuses to conform to anyone’s expectations. The sound of the 10 tracks on ‘Til Death runs from the IAMX-tinged swagger of “Showtime,” to the eerie, almost Depeche Mode vocal patterns of “Lovesick”, to the hook-laden dark pop of “Oh, Gloria!”; ‘Til Death shows Graves at his diverse best.

Prior to the release of ‘Til Death, Aesthetic Perfection ambitiously released three drastically different singles and videos: “Antibody,” “The Dark Half,” and “Big Bad Wolf”. In true AP fashion, taken individually, none of the singles give the listener more than an inkling of what to expect from the full LP. But when taken as a whole, the three tracks encapsulate the essence of what to expect from ‘Til Death: beautiful, haunting and eclectic.

Grave’s debut, Close to Human (2005) was the first release on the newly formed Bractune Records label. Upon analysis of the material it became clear that he had completed two albums with distinctive identities. Though not quite ”Aesthetic Perfection”, a one-off album of Close To Human outtakes entitled Blood Spills Not Far From The Wound was released under the nome-de-plume Necessary Response. The albums were licensed for European release to German darkwave powerhouse Out of Line. Numerous live performances followed and the band made its European debut at the famed Wave Gotik Treffen Festival in Leipzig, Germany. With the success of the WGT performance, Aesthetic Perfection was offered a slot on the annual Out of Line tour, which put the young band squarely on the radar of the ever-scrutinous German club scene.

Inspired by his European success, Grave’s relocated to Berlin to work on the follow up. He spent all of 2006 and most of 2007 touring across Europe while continuing to work on new material. Shortly after a second move, this time to Salzburg, Austria, Grave’s completed work on A Violent Emotion, his second album.

Written between 2009 and 2011, Grave’s 3rd Aesthetic Perfection album All Beauty Destroyed saw Graves pushing his own boundaries, limits and conceptions of what Aesthetic Perfection is supposed to be. This album proved to be the darkest, most melodic and dynamic piece of work Graves created up to that point.

With each new release Daniel has shown artistic growth and a fearless approach to songwriting. The result is something all too rare in music; an artist who has developed a unique, recognizable sound, but has escaped the trappings of clichéd formulaic songwriting. Aesthetic Perfection is best in Grave’s words “I make music because it is the only thing I know how to do. Writing about my every day struggles is what keeps me sane… some people seem to relate to that. If not, fuck it, I’d still be doing this if no one listened.

In the three years since Panic Lift released their debut Witness To Our Collapse, the band has neither been silent nor stagnant. Instead, Panic Lift has been slowly establishing themselves through engaging live performances, appearing on numerous high profile compilations, and recording a follow-up album.

On November 13th, 2012, Panic Lift released Is This Goodbye? on Metropolis Records. This new album showcases a natural progression for the band, fusing their style of hard industrial with elements of synth-pop, dance, and rock.

“It was important for me push myself and try something new” says James Francis, the singer and sole creative force. “I’ve spent so much time touring, learning how to use my voice, and incorporating more live instruments, I felt like it was only natural to bring those elements into the studio.”

Produced by Imperative Reaction’s Ted Phelps, Is This Goodbye? contains ten tracks that revolve around themes of loss, disorder, and strength. “During the writing process for this album I lost my father. It turned my world upside down and I had to find myself again, and a lot of the lyrics reflect that.”

On stage, James is accompanied by drummer Tom Z and Dan Platt on keyboards/guitars. The band toured relentlessly after the release of Witness To Our Collapse, making appearances at the legendary Wave Gotik Treffen in Leipzig, Germany and Triton Festival in Brooklyn, New York as well as touring sprints on both the East and West Coasts.

Established in 2006 in New Jersey, Panic Lift proves that the only constant element of their sound is change, and with Is This Goodbye? they manage to deliver an album that will please fans of Witness To Our Collapse as well as connect with many new fans around the world.

Surgyn are an alternative electronic music project from Scotland. Their début album Vanity was released in 2011 and received widespread critical acclaim, along with two accompanying singles, Hit the Nerve and Sharp as Stars. Vanity went on to sell out in five different editions, two through the duo’s first label, DWA.

In early 2013, Vanity was re-released through Vendetta Records in North America. As well as this, a flexidisc edition of the ∆Aimon remix of The Stranger was released through DWA, with an accompanying full-length remix album of Vanity, called Restitched.

The duo are touring regularly and playing festivals across the world. They are also currently back in the studio, working on their second full-length release.

Nitrogen has been a professional DJ in the Twin Cities area for more then 15 years. He has has been a resident DJ in over 10 clubs including: First Ave 4 years, The Saloon Nightclub 10+ years and Ground Zero 7 years.

DJ Nitrogen currently DJs in Minneapolis at Hard Mondays at the Saloon nightclub and at Ground Zero Fridays for the The Next Element and Saturdays for Bondage a Go-Go.

Nitrogen has opened for dozens of national acts including: Lords Of Acid, Combichrist, VNV Nation, Thrill Kill Kult, Front Line Assembly, And One, DJ Acucrack, Angels On Acid, Voltaire, Cruxshadows, Razed In Black, as well as many others. He has also played at five Rubber Balls, all ten Minneapolis Goth Proms and has played around the country in multiple cities as a guest DJ, including twice at the Eccentrik Festival Festival in North Carolina. Nitrogen is also a yearly fixture on the main stage of the midwest’s largest science fiction and fantasy convention: CONvergence.

Resident DJ at Bondage a Go Go, Hard Mondays, and DJ for the Minnesota Rollergirls.