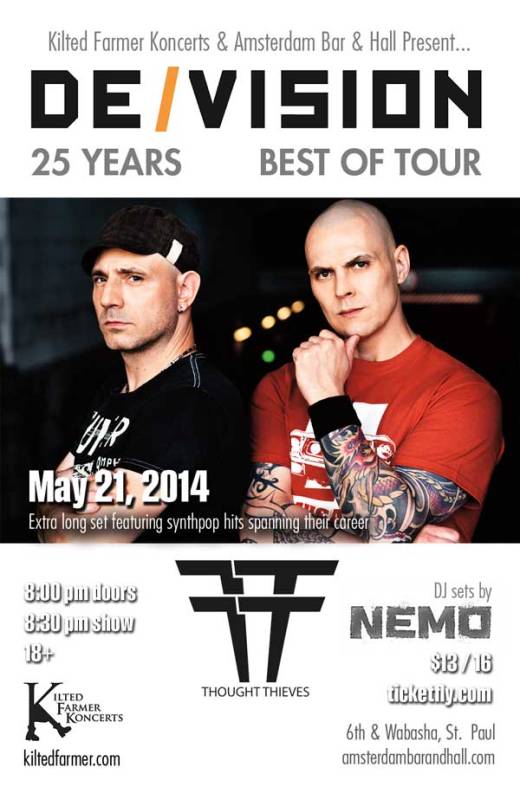 Tickets $13 advance, online at Ticketfly.com
$16 at the door

DE/VISION are celebrating their 25th Anniversary and will be performing an extra long set filled with hits and fan favorites!

DJ sets by Nemo throughout the evening

Stemming from the Darmstadt area in Germany, DE/VISION have been playing their predominantly electronic pop music with melodic English vocals since 1988. Long considered a quantity to be reckoned with on the German music scene, the chart success of their third CD Fairyland marked the breakthrough of this hard working and consistently touring band. Over 250 shows speak for themselves, and DE/VISION have been appearing with guitarists and a drummer to increase the live feel of their performance since 1998, to make their gigs an aural as well as a visual delight. Musically, DE/VISION are changing all the time. While initially being influenced by the famous electronic bands of the day, they now cite the techno, trance, hip-hop and crossover genres as their current influences. These days, DE/VISION themselves are an influence on the music scene and have been forerunners in many respects, working with vocal distortion effects as early as the beginning of 1996 – to be heard on their single “I Regret”, and continued on “Strange Affection”.

Since their move to major label WEA Records in 1997, DE/VISION have come up with new hit material.Monosex contained 11 potential singles with extremely varying structures that surprised a lot of people. All of those who worried that DE/VISION would allow themselves to be influenced by commercial considerations have been proved wrong – the step from independent to major record company has only served to motivate these likeable musicians. During the course of their Monosex tour, DE/VISION repeatedly performed in front of one thousand delighted fans, and the Monosex CD entered the Media Control Charts at # 30, staying for four weeks. The first single release off the album made it to # 47 and stayed in the charts for three weeks.

DE/VISION celebrated their 10th band anniversary on November 17, 1998, with their CD Zehn (88-98), a type of best-of release which included a number of their own remixes. Their subsequent club tour took the group abroad again (to Sweden, Norway, Holland, Switzerland and Spain). DE/VISION were able to enlist the support of the sought-after producer, Georg Kaleve, to help them record their CD VOID in autumn 1999. For five months, the group were busy producing new material in Berlin, and the result of their endeavours proved that DE/VISION continues to do justice to their forerunner role, producing innovative pop music that has set new standards and produced new focal points.

VOID was released on February 28 of 2000 and entered the charts at # 33, while the single “Foreigner,” out in January prior to the album, made it to # 76. The second single released off the album was the track “Freedom,” which went down extremely well, even among non- DE/VISION listeners. At the end of February 2000, the group presented material from their new CD, selling out four of the five scheduled gigs, and the atmosphere at the venues proved extremely enthusiastic. n extensive tour of Germany followed in May, with the band, for the first time supported by a live drummer, filling the nation’s largest clubs and bringing the venues to a boil.

On September 30 of 2000, keyboarder and musician Markus left, while vocalist Steffen, together with many other German artists, became involved in a charity project called Heal Yourself. Autumn 2000 saw the arrival of the ‘Green Court featuring De/Vision’ project, with vocalist Steffen releasing the song “Shining” together with a DJ, catapulting the band back into the charts. The subsequent single “Take” made it to # 99 of the Media Control charts.

The band moved to Berlin and left WEA for Drakkar Entertainment (BMG). The album Two was released in October 2001 and moved up the sales charts followed by a long European tour. In 2002 DE/VISION released not only the Unplugged EP for the fans, but re-released a Live-Double-CD.

Metropolis Records signed DE/VISION in 2002 for North America and released Remixed. Not just another remix album composed of band picked tracks from their last album, Remixed is more of a ‘greatest hits’ remix compilation picked by the fans themselves comprising what could be called DE/VISION’s greatest hits from 1993-1996.

After a brief stint off of Metropolis, DE/VISION returned with NOOB in 2009. On NOOB, songs such as “Death Of Me”, “What You Deserve”, “Flavour Of The Week” and “Love Will Find A Way” shimmer with an with invigorating lightness, while “See What I See” immerses the listener in melancholy dream worlds. Hot on the heels of the critically acclaimed album NOOB, Popgefahr was released in 2010. Popgefahr moves seamlessly from danceable tracks such as “Flash of Life” to the slower, lyrically driven “Be A Light To Yourself”, Popgefahr is a well rounded, cohesive album.

Where many acts would rest on their laurels, DE/VISION released Rockets & Swords in 2012, the most beautiful album of its storied career. Steffen & Thomas once again went into the studio with the producer team Schumann & Bach, who worked with the duo on the more recent albums NOOB & Popgefahr. From the echoed notes of “Beauty Of Decay” to the haunting “Want To Believe”, Rockets & Swords is an exquisite shimmering beacon of electronic resplendence.

Thought Thieves are a synth pop band. It’s pop in the same kind of way that the Cure is pop…. but more dance/synth oriented….. and getting more synthy as they go… They lug 7 keyboards and drums to live shows and let it all out…

Their first EP, “All I Pretend”, debuted in April 2009. Their second EP, “Krista”, launched in April 2011. The group has been featured in the Twin Cities Electropunk compilations and has opened for national acts like Lords of Acid, Assemblage 23, I:Scintilla, and Anything Box.

DJ Nemo (Formerly of the Industrial / EBM band Envy is Blind) has been spinning in the Twin Cities for the last 10 years. His sets primarily feature tracks from industrial, aggrotech, and EBM artists alike. You can catch him as a featured guest at local clubs such as The Saloon and Ground Zero. He is also one of the staple VJ’s for the Twin Cities annual Goth Prom.

Last time @k.a.n.g.a was in Minneapolis, things got a little sweaty. We’re very happy to welcome her back on Friday, April 17 to the Red Sea with @waxlead, The Trapezoids, and @devatadaun (DJ sets). Ticket link with full details are in our bio and at kiltedfarmer.com. She’s celebrating her birthday with us, so let’s be sure to help her make it a good one!