With special guests The Azoic, F.T.C. and DJ SLT

“It’s beyond my personal demons, and extremely honest,” says LaPlegua of the fifth Combichrist album Making Monsters. With five albums, thousands of shows, and four full months in Europe touring with Rammstein (in front of hundreds of thousands of people), Combichrist has become a purely visceral creature, driven by instinct and emotion; stripped of all pretension. Its urgency – most evident in the raw and uncompromising new album – is fueled by expressions of lust, anger, pain and hate.

Presenting a foreboding soundscape, the album kicks off with a hauntingly atmospheric instrumental “Declamation,” setting the tone for what is to follow: dark, stabbing synths; heavy, robotic beats; and swarming, buzz saw-style guitar sounds. Songs such as “Follow the Trail of Blood” (featuring Brendan Schiepatti of Bleeding Through) are baretoothed aggression; meanwhile the floor-stomping, first single “Never Surrender” proves to be aggressively catchy, with its metronome-tight rhythm through the verses, giving way to explosive choruses that is bound to pack dance floors. “Through These Eyes of Pain” takes a much subtler approach. Its echo-y vocal wash and glitchy beats conjure images like a mournful dream, exposing the man inside the monster. Though the moods displayed in Making Monsters are decidedly sinister, LaPlegua manages to portray these emotions in many different guises. Laden with hook heavy choruses, speaker-crushing beats, and LaPlegua’s trademark dark, aggressive vocals, this is an album that exudes honesty and the darkness that often comes with it.

Initially cutting his teeth in the seminal Norwegian hardcore bands Fleshfire and Lash Out, LaPlegua segued out of that scene into the electronic music world with Icon of Coil. Originally a solo project, it morphed into a full band with the additions of Sebastian Komor and Christian Lund. Not only did IOC mark LaPlegua’s first major work with electronics and dance beats, but it also granted him wider exposure beyond Norway; IOC was LaPlegua’s first project to be released in the United States.

It wasn’t until 2003 that LaPlegua founded Combichrist – the project that would soon dominate his time. A departure from IOC’s futurepop sound, Combichrist took LaPlegua’s hardcore past and electronica present and merged them into a singular, mechanical music monster. Without the compromise of the band dynamic, LaPlegua, who does everything in the studio himself on Combichrist releases, was able to explore whatever avenue he desired musically. What he found was a long dark road with plenty of twists and turns. The Joy of Gunz, LaPlegua’s first release as Combichrist, was quickly followed by two EP’s: 2004’s Kiss the Blade and Sex Drogen und Industrial.

In 2005, LaPlegua was back at it again, releasing the landmark album Everybody Hates You. Defying the dreaded sophomore slump, the second Combichrist full-length featured two tracks that would become club classics—“This Shit Will Fuck You Up” and “This Is My Rifle”—and was also the project’s U.S. debut on Metropolis Records. Further benchmarks were set with the release of the 2006 EP Get Your Body Beat, the title track of which landed Combichrist its first appearance on Billboard’s Top 10 Dance Singles chart.

The years that followed brought on two more full-length albums — What the Fuck Is Wrong with You People? (2007) and Today We Are All Demons (2009) — as well as a handful of additional EPs. On top of Combichrist’s many releases, LaPlegua has also logged countless miles, globetrotting on tours of Europe, South America, Australia, the United States and points in-between.

Though Combichrist has kept him busy over the past seven years, LaPlegua has other interests that fill the rare breaks from his main musical project. The Atlanta, GA – based songwriter maintains Panzer AG, a sonic hybrid of Combichrist and Icon of Coil and even plays in a straightforward American rock ‘n’ roll band, Scandinavian Cock. This affinity for Americana is also displayed in his love for hotrods and motorcycles. On his MySpace page, LaPlegua states, “I’m a Norwegian grease ball, and I’m never afraid to get dirty!”

With Making Monsters, man and beast have combined, evolving beyond the demon it once was and into a greater, bigger and more malevolent force in music. This time, there’s no surrender. 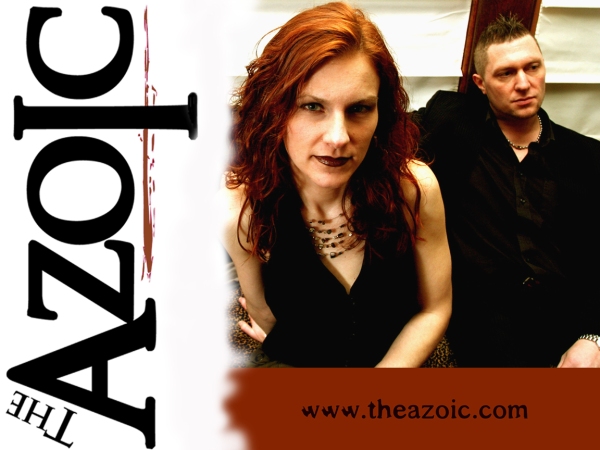 The Azoic are a female fronted Electronic Dance / Industrial EBM band originally based in Columbus, Ohio and officially began in February 1996. In 1998, they signed to Nilaihah Records and began their journey…

After 3 releases in North America, “Where Broken Angels Lie”, “Forward” and “Conflict”, The Azoic grabbed the attention of the German label, Infacted Recordings. On February 2, 2004, The Azoic debuted in Europe with their release, ‘Forward + Conflict’, which sold out in 6 months! They quickly made a mark and moved up to the no. 4 spot on the DAC [German Alternative Charts] and no. 2 on the DUC [Dutch Alternative Charts]. In 2004, The Azoic released their fourth full-length CD, ‘Illuminate’ and continued to polish their trademark style, even adding a cover of “Obsession”, the 80’s Animotion classic, with guest vocalist Frank Spinath of Seabound.

After a video game release (featuring “Conflict (Turmoil Mix)” on Microsoft XBox’s ‘Dance Dance Revolution Ultramix 3’ alongside vocal appearances featuring Kristy and several shows across the US, Europe and Mexico, The Azoic continued to ascend. With 5 full-length releases, 2 EP’s, 2 tours and many shows, RMP chartings [US], 4 on the DAC charts + bullet on Native25 [Germany], 2 on the DUC charts [Netherlands], several magazine and webzine interviews (such as Zillo, Sonic Seducer, Side-Line, DNA Six, Industrial Nation, Gothic Beauty), a video, and appearances on numerous compilations, both nationally and internationally, The Azoic remained at the forefront of their genre.

The Azoic went on hiatus in 2006 after the departure of keyboardist Steve Laskarides; singer Kristy Venrick has since reformed the band with new keyboardist Lawrence Z.. and drummer, guitarist and keyboardist Andreas K. 2008 brought the release of ‘Re:Illumination [the mixes]. 2012 will feature a new release and new music video!

Magnificent vocals are what make their fans wanting more and a passion for music is what keeps them going. Following a 14-year stint of writing,producing and heading up the Electronic Dance group, The Azoic, lead singer,Kristy Venrick felt a need to forge ahead even further.

The Azoic is busy in the studio putting the finishing touches on a new EP, entitled “Corruption.” With several live shows already scheduled in the United States, a new album in the works and CD release parties planned
worldwide, 2010 is looking to be a promising year for The Azoic!!

Dark, Eerie, Spooky and Sometimes Just Fun.
F.T.C. is a New Style of Sound Manipulation for your Ears.
Influenced by the Paranormal and the Unknown,
It started with my interest in Aliens, Abductions, Ghost and other Haunting Things that go bump in the night.

F.T.C. is an Electronic/Experimental/Industrial Project from Minnesota.
Drawing Inspiration from the Supernatural and Paranormal,
Jesse Roberts creates a tapestry of nightmarish visions and electronic nightmares.

DJ SLT is the host of Across The Board on KFAI, early Friday mornings from 2-6am (Central Time US). DJ SLT has had a love affair with Twin Cities radio since the early 1980’s. He also had an amazing stint as a sub DJ on a wide variety of KFAI from fall 2004 to spring 2007. Including: Wave Project, Tehuti, This Little Girl’s Gone Rockin’, Jet Set Planet, Mystery Train, Dart Gun Radio, In Your Ear, Voice Cried Softly, Radio Rumpus Room, Crap From The Past, True Brit! & Musical Transportation Spree.

You may also see DJ SLT in local nightclubs as the guest DJ for Transmission at Clubhouse Jager (and formerly The Hexagon & Imperial Room), The 7th St. Entry, Chamber at The Bolt Underground, Hard Mondays at The Saloon, Triple Rock Social Club, 2010 Twin Cities Dark Arts Festival, Gothic Valentine 2011, Next Element and monthly for Bondage A Go-Go at Ground Zero in Minneapolis. As of June 2012, DJ SLT is the resident DJ for “Dark Quarters” at Rusty Quarters Arcade.

Last time @k.a.n.g.a was in Minneapolis, things got a little sweaty. We’re very happy to welcome her back on Friday, April 17 to the Red Sea with @waxlead, The Trapezoids, and @devatadaun (DJ sets). Ticket link with full details are in our bio and at kiltedfarmer.com. She’s celebrating her birthday with us, so let’s be sure to help her make it a good one!