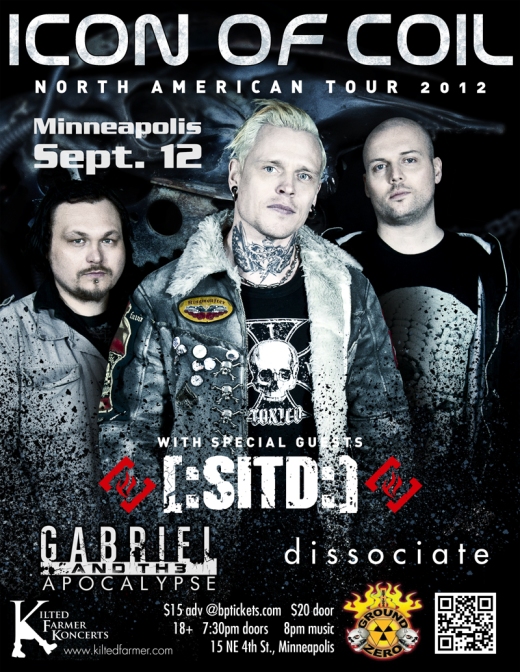 With [:SITD:], Gabriel and the Apocalypse and Dissociate

In 1997 Andy LaPlegua established the project, Icon Of Coil, which was primarily a concept built around a logo, graphic design and music. Soon after the inception, the music soon turned out to be the most important part of the concept and LaPlegua invited Sebastian Komor, who he had worked with before on the project Sector 9, (now called Moonitor) in 1996, to work with him on the project as a live member. After just a couple of gigs and the release of IOC’s first single, “Shallow Nation”, Seb became a full-time member.

Shallow Nation, released early in 2000, sold out the first thousand copies after only two weeks in the stores, which resulted in a deal with the Norwegian record label Tatra Records. Around that same time Tatra Records released the compilation Sex, Goth & Electronics, to which IOC contributed an exclusive version of their song “Repeat It”.

Before they started working on their second release IOC did programming for the Apoptygma Berzerk track “Starsign”. Soon afterwards, they traveled to Germany, with live member Jon Holm, to support Apoptygma on their Welcome to Earth tour 2000 at their gigs in Frankfurt, Cottbus and Leipzig before going back to Norway to play together at Rockefeller in Oslo.

Audiences seemed to enjoy Icon Of Coil’s energetic and melodious sound fused with Andy’s hypnotic voice and the band’s success grew. One Nation Under Beat debuted in the top 20 on the DAC-chart (Deutsch Alternative Chart) for eight weeks and peaked at number three.

In late spring of 2000 at a gig in Uddevalla, Sweden, Christian Lund joined the band as a live-member and went on stage with Andy and Seb for the first time. Along with being the vocalist for his En Route project, Christian had a background from a melodious EBM Fredrikstad-band called Elected By Fear where he played together with Fredrik Hansen from Echo Image (who also played at that gig) and Marius Johnsen from Centravibe.

After the release of IOC’s first full-length Serenity Is The Devil in November 2000, which reached number three on the DAC-chart, the band went to Germany together with Beborn Beton. With nine gigs, positive feedback from the audience and very good reviews on the debut album, IOC gained a following in the synth/industrial scene.

Shortly afterward, the album crossed the Atlantic and was released in North America by Metropolis Records. On March 29th, 2001, the band itself followed and boarded a plane to Chicago. They were on their own in a foreign country and on a tight budget. The band flew from city to city, slept in hotels and sometimes even in the homes of their promoters. The song Situations Like These from the (then) forthcoming Seren EP was played live for the first time to an incredibly enthusiastic and energetic American audience, which made the tour a big success. Then after playing at Slimelight and Astoria II (Electrofest) in London, the guys had a short break before they faced a festival-filled summer in Europe.

The summer kicked off with a successful show in Leipzig, Germany, at Wave-Gothic Treffen. The following festivals included CSD, Zillo Festival, Xtreaktor Festival, Eurorock, Infest and ended at M’era Luna where the trio did a hard-hitting performance in the Hangar.

Situations Like These became a big club hit and the band was ready for a second tour (this time in a Nightliner touring bus) of North America with VNV Nation. The leg began in Chicago on the 16th of November at a packed Vic Theatre, which set the standard for the rest of the 19 shows. Icon of Coil, VNV Nation and the rest of the crew continued up to Canada, down the east coast to Florida, through Texas to the West coast and Hollywood, where they did their 15th show in front of about 900 people at the Palace. The four-week tour ended in Edmonton, Canada with a great show and a huge after-party.

During their tours, the band found the time to write material for their April 2002 sophomore album, The Soul Is In The Software, which stayed at number one on the DAC for a several weeks. IOC then performed at two more festivals: The Dark Jubilee Festival in London; and later as the Sunday-headliner for Synthpop Goes The World in Toronto, Canada, which turned out to be a very good but warm weekend and concert.

Icon of Coil came a long way in a short amount of time. For 2004 their third album, Machines Are Us, continued the trend with pummeling beats, sympathetic vocals, anthem-like melodies, and sweeping synths. Careful not to be outdone or forgotten, Icon of Coil released UploadedAndRemixed, which featured brand new mixes of songs from their first two records and two exclusive tracks at the tail end of 2004. No speaker is safe from Icon of Coil’s bombastic onslaught.

Bone-crunching beats and apocalyptical electro, pumped into the world from the Ruhrgebiet, the former industrial heart of Germany – that is [:SITD:]. The name stands for Shadows In The Dark, but without light no shadow can be and [:SITD:] certainly are a bright spot in the dark music scene.

Ever since their initial success “Snuff Machinery” hit the club floors the band is known and recognized for their trademark industrial electro beats crossed over by trance sequencers and epic string landscapes. Musical mastermind Tom Lesczenski crafted the unique [:SITD:] sound since he joined the band in 1999 to replace Thorsten Lau who had overseen the musical side of the project since it was founded in 1996.

On four albums and five EP’s/MCD’s [:SITD:] have successfully delivered to the dancefloors of the dark electro venues throughout the world. But they also carry deep, meaningful messages into the heads of their listeners. Singer Carsten Jacek writes the lyrics and brings them across in his unmistakable voice. Tom sings the more melodic tracks, when he feels an emotional connection, and provides backing vocals. So does Francesco D’Angelo, who joined the project in 2003 as a keyboarder.

Although Carsten and Tom have clearly separated their responsibilities in the band the result is almost always a remarkable match between music and message. “We have perfect chemistry”, states Carsten to describe the workflow in the band. “Sometimes I have an idea for a topic, write some draft lyrics or a couple of lines and send these to Tom with a description of my intentions and feelings. He then comes up with a song’s outline that perfectly matches what I had in mind. Or sometimes he produces the music first and I find the words to match his ideas.”

The band’s latest release is the album “Rot”, the German word for the color red. When it came out last October, it immediately climbed to the top of the DAC, the German alternative charts, and remained there for the maximum allowed time of eight weeks. It is filled with highly energetic club crackers and a few deep, atmospheric mid-tempo songs.

Red symbolizes energy, aggression, passion but also alert. It is a wakeup call for a dull society as much as an intense journey into the depths of the human soul. The title track sets the exciting pace, provides the creative frame of the album and also represents the sign of hope among the serious topics of the other songs.

The three have toured Germany and a couple of other European locations until the end of last year to present their new work. This year, they are confirmed to play on major German festivals with a gig on the Wave Gothic Treffen in Leipzig and the Blackfield festival in Tom’s home town of Gelsenkirchen among them.

Their original plan was to go to the USA this spring but these plans had to be cancelled on short-notice. Having already toured the USA with Imperative Reaction in 2008, Tom has only the best memories. “You just don’t believe that after travelling hundreds of miles through vast deserts you will find people who actually know your music. But they are there and they even know the lyrics.”

Gabriel and the Apocalypse

Minneapolis industrial rock outfit, Gabriel and the Apocalypse are here to surprise and inspire. “Longevity comes from doing something different and having artistic integrity” says vocalist, Lindy Gabriel. “We want to take the mainstream and add our own artistic qualities.” The result is Gabriel and the Apocalypse- creative, original, visual, artistic, strong and here!

Gabriel and the Apocalypse released “Into the afterglow” a full length cd in 2009, to much acclaim. Their single, “Hey you” was voted #7 song of 2009 on the Minnesota’s 93x “Loud and Local.” “Hey you” was also published for use on MTV/Microsoft’s Rock Band Network.

In addition, the band has recently been featured on the Jesse James Off Road DVD series and in 2010, GATA signed with Artist Development and Management Firm, The Inner Light Agency. Damon Moreno of iLA says “Gabriel and the Apocalypse has real originality and unique sound. They’ve proven they are ready to work hard and that music is they’re life. Still, the best is yet to come! This band has so much to give and it’s truly awesome.

Most recently GATA has finalized a distribution deal with In Grooves/Universal Music Group. The band is due to release their third full length record titled “new World disAsteR”. “We want to generate a fresh sound.” says Lindy. Recently, the first single from “new World disAsteR” was released entitled “LIKE GoD” featuring Rick “St1tch” Thomas of MUSHROOMHEAD/VENTANA and impressed fans have raved! The new album has a release date for Sept. 13th 2011 and is set to impress.

Gabriel and the Apocalypse have shared the stage with the following national acts: Flyleaf, We are the fallen, American Head Charge, Otep, Mushroomhead, Soil, Pearl, Combichrist, Lords of Acid, Thrill Kill Kult, Ventana and many more.

Conceived in 2001 by Jonathan Ford, the enigmatic Dissociate has been one of the hidden treasures of the Twin Cities electronic music community. Each sound within each track is carefully designed to experiment with and express the idea of finding the natural in the un-natural. The latest album is “DECImate!” released on 7/5/2011. Recorded and produced by Charles Sadler (Stellar Vector, Little Tin Box) and mastered by Nic Heidt (MSRP).

Dissociate is the solo project of Jonathan Ford, a Minneapolis, MN USA based musician, sound designer, and DJ that draws influence from an array of electronic genres both past and present. In contrast with many current electronic acts, Dissociate is designed with spontaneity and improvisation in mind. Each song is constructed and arranged in real-time from multiple hardware sound sources, triggered samples, live keys, and looping sequences. Though the overall structure of each song is preplanned, every performance is a unique exploration of the material often resulting in new musical discoveries within this confined aural space.

Dissociate released its debut independent album “Precursor” in May of 2008. The album was primarily recorded live with minimal overdubbing and post-production. The tracks were mastered by Colin Mansfield (Fine Art, Sound Commandos, Husker Du producer).

Past projects in which Jonathan Ford has participated include: playing guitar and programming for Dies Irae !US (1996-1999), co-founder of The Descent on KUOM 770 Radio K (University of MN, 1997-2003), as a sound designer, Jonathan has contributed music, audio collages, and sound effects to numerous local theatrical and performance art pieces. In 2002, Jonathan participated in an 8-hour production of “Die Hamletmaschine,” performed on July 4th in conjunction with the XIV World Congress International Federation for Theatre Research in Amsterdam.

At present, Jonathan produces and plays guitar for the emerging outfit Stellar Vector, which released its debut album “A Flock of Cowards” in 2010 and provides beats and samples for Aurascape, a local electro-new wave group.